The Thin Line is a photography exhibition that addresses the fine line between the time before the invasion of Ukraine and that terrible reality afterwards. Curator Kateryna Radchenko is the founder of the Odessa International Photography Festival. The presentation at the European Art Center was realized at short notice as a pop-up exhibition - please note the irregular opening hours! The unusual exhibition design allows visitors to actively explore the photographic impressions as part of a landscape of images distributed throughout the space.

Holiday closing
Exhibitions will be closed on 31 December 2022

Any additional opening hours will be announced at short notice or are possible on request by appointment.


The opening hours can also change at short notice, please inform yourself before your visit online or by phone.

One winter morning we woke up to the sound of explosions. This was the beginning of a full-scale war in Ukraine. The foreign media predicted a rapid development, but we were gaining patience. The war in Ukraine has been going on for eight years, more than a month — an active invasion by Russian troops. During this time we have changed inevitably: our understanding of time, our daily habits and values have changed.

The exposition is organized in such a way that among the photos of war and destruction one can find the pictures of much earlier periods taken in peaceful cities and towns. It is like our memory, where the moments of life before the war emerge, but then we look around and back to our reality, our ruined cities where people were killed in the streets.

It seems that everything that happened to us before is a dream that we did not have time to fully experience, feel and enjoy. The thin line between past and present, between mirage and reality.

What has to happen for radical changes to take place in the lives of a country's people; literally, for no stone to be left unturned? We are all witnessing such a change through the media. However, do we actually still perceive these images? And which images do we see? What has so far shaped our perception of Ukraine?

In this context arises yet another question. Which image of war is being shaped by social media today? "The Thin Line" is a photography exhibition that explores the fine line between the time before the war of invasion and the horrific reality that ensued afterwards. The photographers in the exhibition used to photograph architecture, portraits, or photo spreads. Now they are war photographers.

The Instagram account of photojournalist and documentary photographer Kathryn Moskalyuk illustrates the biographical rupture of Ukrainians: after features from Sri Lanka and the Dominican Republic, a video from February 26, 2022 shows the grey sky over the city of Lviv. In the background, air raid warning sirens are wailing. Then, in March, a series of photos shows volunteers weaving camouflage nets (see picture above). Many people in our country wanted to do their part these days. In a sense, the new images by photographers like Moskalyuk can of course also be seen as such a contribution.

The thin line between dream and reality is also apparent in the two photographs with trees by Oleksandr Navrotskyi and Mikhail Palinchak. Surrealistically beautiful and full of poetry, delicate little flags are fluttering in an idyllic paradise on one side, while on the other side a birch tree is broken, shattered, fragmented, and wounded, like the city of Borodyanka in which it stands. The extreme choice of frame, the focus on the splintered branches creates a surreal and dramatic visual language. We behold everyday life and the normality of horror as well as the brutal destruction in highly aesthetic images. The deceptive seduction of pictorial illusion becomes palpable at the same time as its shocking banality. 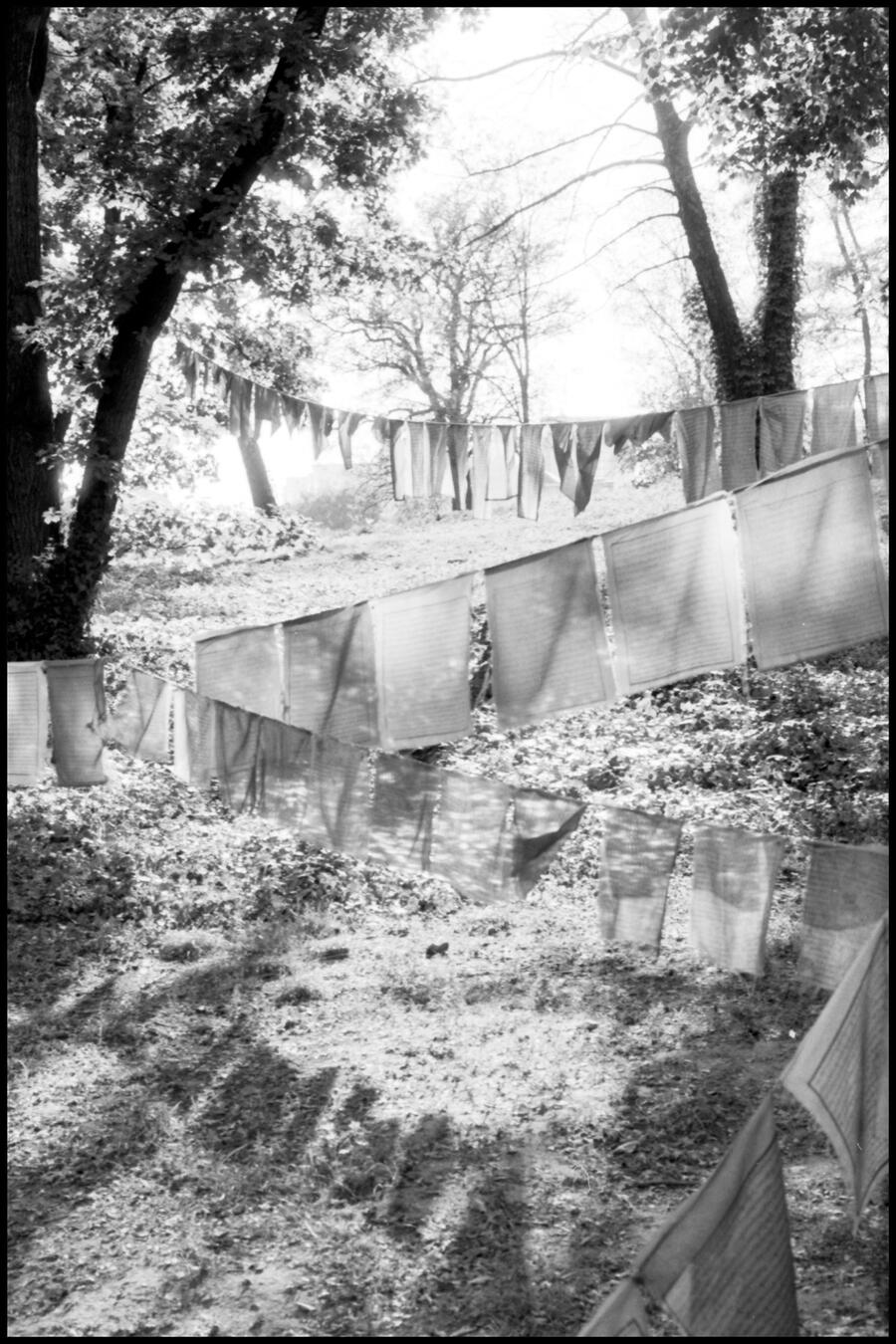 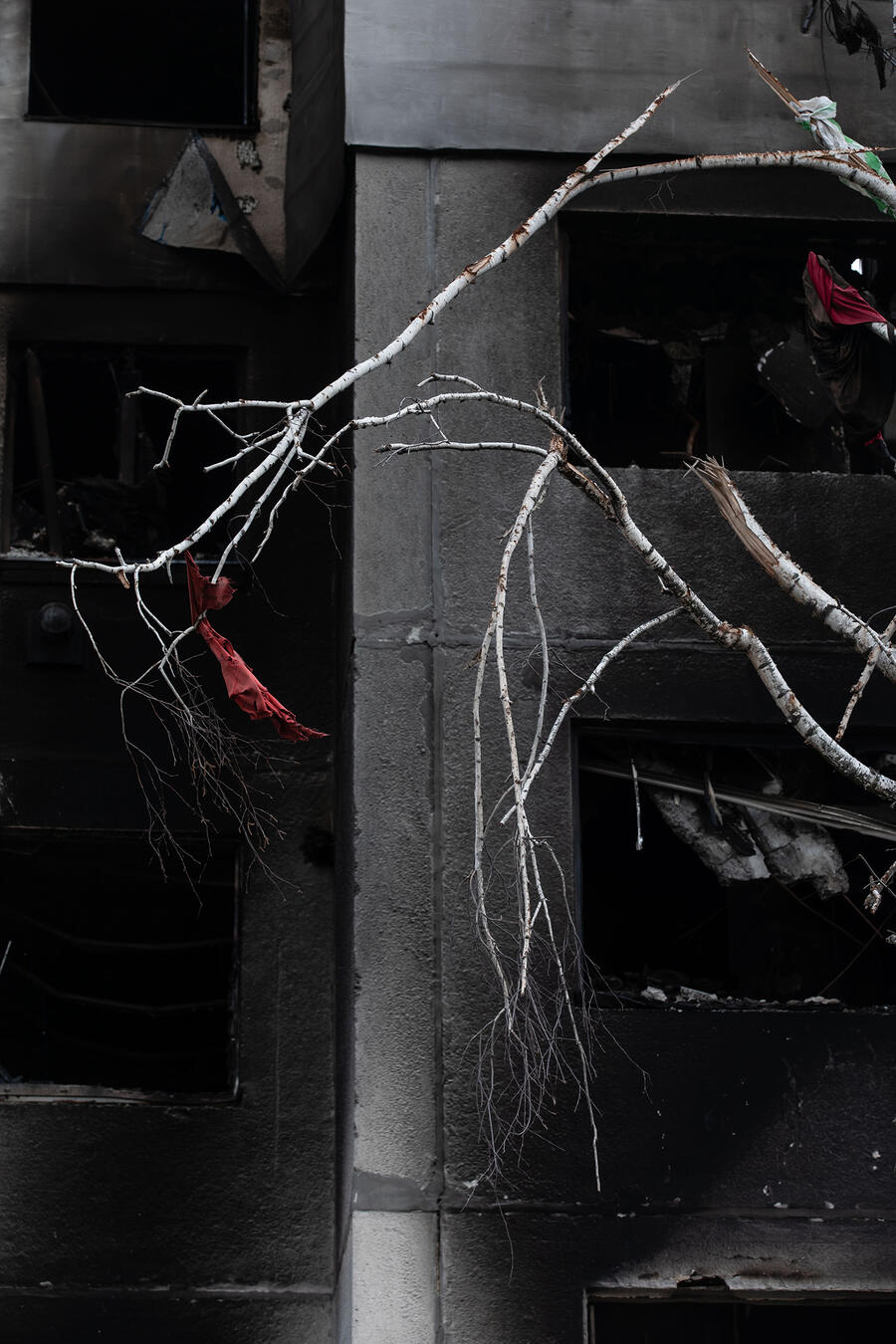 Curator, lecturer and photographer Kateryna Radchenko is interested in subjects such as manipulation, propaganda, and amateur photography. She is the founder of the Odessa International Photography Festival. In 2013, during an international cultural manager exchange program by the Robert Bosch Foundation and Mit Ost e.V., she met the curator Sandra Dichtl, who also works in various museums, as an exhibition organizer, and as a founding member of the collective udei e.V. Since the beginning of the war in Ukraine, the two have been in close exchange about support possibilities. Radchenko lives in Kiev, but is now based in Lviv, where she pools her contacts throughout the country's photography scene and facilitates the circulation of the images through her connections in the international art scene. The project The Thin Line is the result of the 2013 encounter and shows tremendous artistic flexibility. It cannot and does not want to be a replacement for the Odessa Photo Festival, nevertheless it allows us to experience people's lives from the point of view of artistic photography.

With many thanks to: