The website of the Center for Art was relaunched in April, 2016. Some exhibitions before this date are listed in the Picture Gallery.

1 October to 27 November, 2022 in the barell vault and the gallery on the ground floor: Large-format cutouts and a new installation in the barrel vault of the Schafhof create an exciting game of hide-and-seek using light and shadow.  ... more information

9 July to 25 September, 2022 in the gallery on the ground floor: Exhibition with works by Barbara Nagy and Ádám Szabó from Hungary in the framework of the European Art Fellowship of the District Council of Upper Bavaria.  ... more information

30  April to 26 June, 2022 | prolonged until 3 July, 2022: In a space-filling video installation, the dynamic light composition by renowned Czech artist Pavel Mrkus merges the real and the virtual space. .  ... more information

30 April - 26 June 2022 / prolonged until 3 July, 2022!: Jürgen Bürgin, Martim Brion, Dirk Pleyer: The juxtaposition of painting and photography in the context of the year's theme enables a comparison of the artistic media in their search for the representation of light. ... weiterlesen

26  February to 18 April, 2022: Painting, Photography, Drawing, Sculpture, Installation, Video - The exhibition shows the work of 17 artists who had participated in the artist exchange in 2020 and 2021 within the framework of the European Art Scholarship of the District of Upper Bavaria.  ... more information

11  December, 2021 to 13 February, 2022: Ute Mahler and Werner Mahler's photo project "By the Rivers" offers a poetic view of Europe along the continent's great rivers.  ... more information

prolonged! 3  October to 5 December, 2021: an exhibition with artists from Dachau and Oświęcim.  ... more information

Art and Healing – A Roma Contribution for Europe

24 April to 18 July, 2021: Eastern Sugar is an international, interdisciplinary, contemporary visual art project with strong focus on artistic research. The participatory installation "Sugarloaf Manufacture and Archive" by Ilona Németh offers an insight into the function and history of the sugar industry in Slovakia. The exhibition "Crossing Borders" shows three artistic positions that explore, question and subversively overcome the borders in Europe.  ... more information

Andreas Kuhnlein: The Ship of Fools

prolonged until 11 April, 2021: In his installation The Ship of Fools, comprising over 100 sculptures, artist Andreas Kuhnlein thematizes protagonists of all manner of historical events, people, ourselves.. ... more information

prolonged until 18 April, 2021: The exhibition shows a series of large painterly works on nature and natural history concerning the formation of families, species and individual objects. ... more information

5 September - 29 November, 2020: Forensic Architecture is an independent art and research group founded in 2011 based at the Centre for Research Architecture, Goldsmiths, University of London.. . ... more information

14 December, 2019 - 16 February, 2020: The exhibition examines the artistic and scientific freedoms that we enjoy in our time inspired by the 70th anniversary of the German constitution.. . ... more information

5 October - 1 Dezember, 2019: An exhibition focusing on the representation of nature and life, a presentation of the innovative interdisciplinary field of "biological art" around the intersection between art and science. ... more information

12 July - 29 September, 2019: Banz & Bowinkel (Germany), Clemens Fürtler (Austria), Marc Lee (Switzerland) - Three artistic positions will be presented in the exhibition which deal in different ways with technology and the topic of urbanization as well as the connection of real and virtual spaces. ... more information

6 April - 23 June, 2019: Employing a wide range of artistic strategies, both artists deal with social concepts and contexts. Elsa Gomis brings together traces of current and historical events related to migration. Rudolf Pacsika creates visual metaphors for the manipulability of the paradoxical relationship of reality and media images. ... more information

16 February - 31 March, 2019: The exhibition introduces the works of the Polish, Hungarian and Upper-Bavarian artists who took part in the artist-in-residence-program in 2018. A central topic are the connections between people, thoughts, places, times and objects.. ... more information

24 February  -  2 April, 2018: Memory and emotion - These works by artists from three countries revolve around structures for preserving cultural memories in objects, images and media.  ... more information

15 December, 2017 - 18 February, 2018: The exhibition on the ground floor of Schafhof presents photographies by Georg Küttinger along with a sound installation by Hans Wesker. The two works are independent, however, related to each other due similar structural elements.  ... more information

21 October - 3 December, 2017: Via Lewandowsky developed a new artwork for the exhibition in the European Center for Art.. Sound elements are playing an important role in his sculptural-installative objects.  ... more information

29 April - 18 June, 2017: The exhibition presents artistic positions from Poland and Upper Bavaria with artists who took part in the artist exchange between the Centre of Polish Sculpture in Orońsko and Schafhof ‒ European Center for Art Upper Bavaria in the fall of 2016 and spring of 2017. ... more information

17 December 2016 - 12 February 2017: The exhibition is a cooperation between the Diözesanmuseum Freising and Schafhof - European Center for Art Upper Bavaria. It presents Christian devotional images from various centuries together with modern abstract paintings, exploring how these images emotionally move the viewer. ... more information

Tatjana Uzt provides an inside-view into the world of travesty stars throughout her paintings and installations. She broaches the issue of gender roles and their social acceptability. ... more information

Eszter Szabó's works deal with ordinary details of everyday situations that are so familiar that they almost become invisible. Vulnerability, inertia, weariness, as well as unattainable desires to be perfect is a general theme that returns in her animated paintings.. ...more information

Roland Fischer is an internationally renowned artist who is based in Munich. From 1980 onwards, Fischer became the first of the young German photographers to experiment with large-format portrait shots and developed his famous collective portraits, among other things. ... more information

Six artists from Syria and Upper Bavaria who took part in the artist-in-residence project Transfer > Syria present their work in an one-week exhibition. ... more information 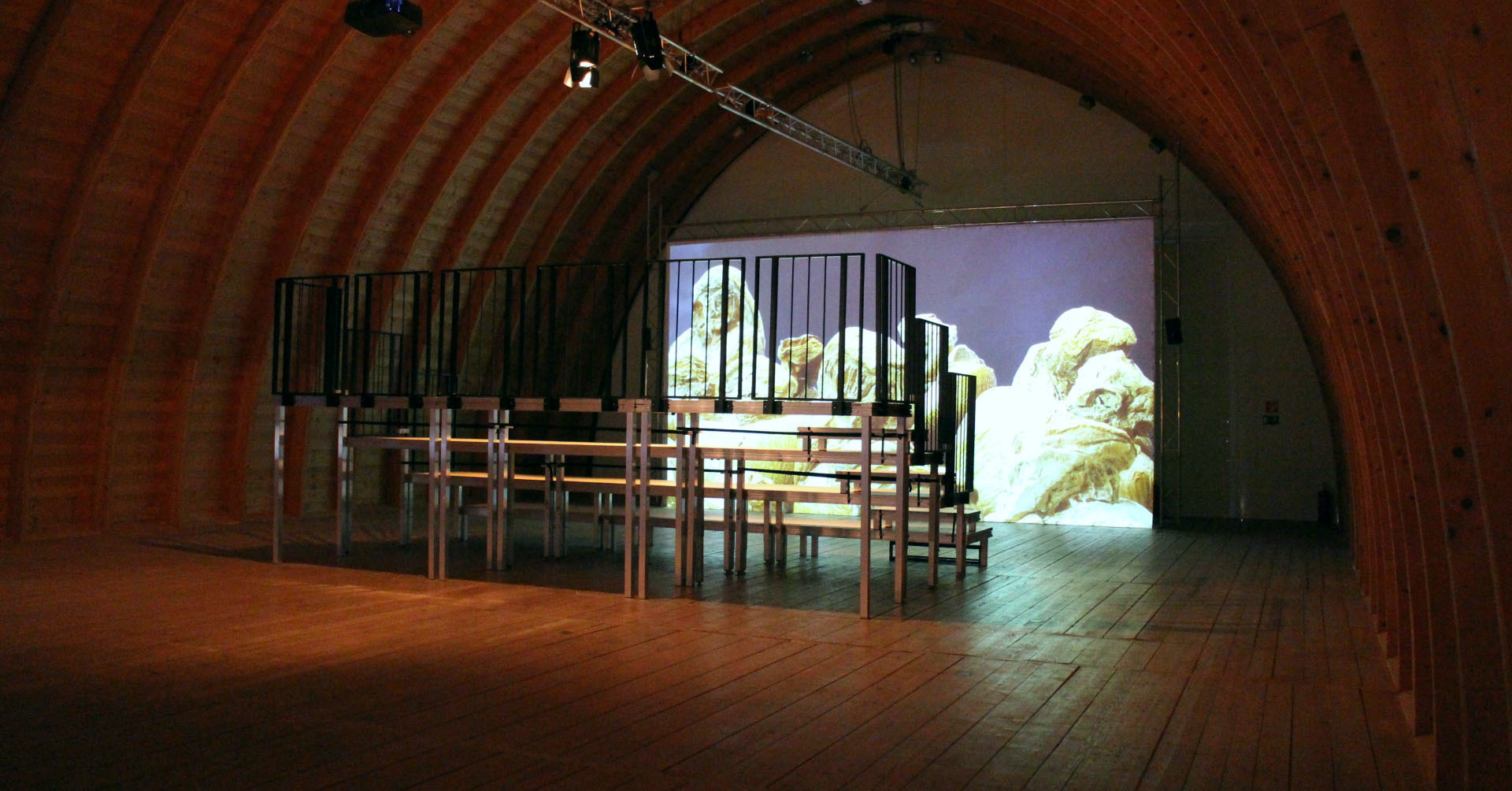 Vollrad Kutscher is considered to be one of the pioneers of media art in Germany. He created ten new portraits of his famous series of light objects "Leuchtende Vorbilder" (Shining Examples). His video "Kartoffelmovie" (Potatomovie) is presented in a new, site specific installation. ... more information

Richard Thieler takes photographs of cinemas since 2009. His impressive images of the fassades of cinema buildings in the night are presented in light boxes. ... more information